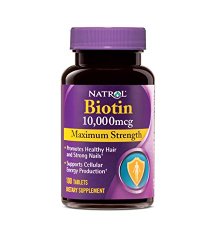 his hair for years and is now on the brink of complete baldness on the scalp, I researched and tried some of the most common bottles available.

The first one was a Nature’s Bounty bottle that had 100 tablets and 1,000 mcg. I took it for about 1 month and the results were alright. I can’t say I noticed any new hair growth, but the existing hair that I had was not thinning further nor dropping out.

But 1,000 mcg was not enough for me and I had to find a more potent biotin supplement and that’s when I visited Amazon to check out which ones had the best reviews.

But I decided to try the Natrol bottle because with 10,000+ reviews, I had never seen a hair supplement that highly rated. The bottle was also extremely cheap about $12 for each. I ordered 3 of them.

So is Natrol Biotin the best supplement for hair growth? My 60 day results (with pictures):

2+ months into taking one tablet a day of this, I have to say I am quite amazed at what I’m literally seeing in the mirror.

There is significantly more NEW hair that I am seeing more and more of, but the particular areas where this started was where my hair was falling out last.

The thinning, then baldness started on my scalp, then worked it’s way down and what this supplement has done has preserved the last remaining hair near my forehead and it appears that it is slowly regenerating the areas where I lost it.

Now you may be thinking that 60 days and only noticing this isn’t a lot, but let me tell you, for someone who has tried different approaches to eating more healthy foods that restore hair and taking supplements, only to at the very most see a preservation of existing hair and rarely new hair growth, this supplement has gone farther than anything else has.

One thing though: It’s EXTREMELY slow acting which is what you’ll find a majority of even the most positive reviews of Natrol Biotin say here.

In fact, let me run you through the process I noticed:

The first 2-3 weeks I didn’t notice anything.

By week 4 and up, I had started seeing new tiny hairs above my forehead showing.

Several weeks after that, there were many more of them, and some had started to grow into longer, darker hair.

Now towards the middle and above my forehead where there was a huge balding area, I am again noticing new white hairs growing.

This supplement is slow acting and to get to the results I have today took a lot of time, but at the cheap price these tablets are at and how easy they are to use and see results with, it is well worth it.

What I am seeing is literally NEW hair growing, slow, but still it’s a major breakthrough for me. Nothing else I’ve done has acted as well as this.

The only mistake I made though is getting 3 bottles at once. The problem is each has 100 tablets, but their expiration date is around 6 months.

6 months is about 190 days and with 2 bottles, you’ll reach the expiration before you finish your second bottle, which means the third is going to waste, so if you get it, just get 2. I had to give my third one away to someone who also had thinning issues with their scalp.

Is Natrol Biotin really worth it?

My experience with this Natrol product is not uncommon and as I said, if you read reviews, a lot of them will seem similar to mine in that they also say this stuff worked the same, slow way it did for me, but they love it. It’s a best seller with nearly 5 stars on average given.

No matter what your hair situation, I absolutely have no doubt this product will be of great use to you. It is extremely simple to use:

Just take it with food. I typically try to eat it during my breakfast and when I do, I try to also include some healthy foods along with it, which are usually avocados, oatmeal and/or some sort of salad.

One thing though: It is not advised to take this with raw eggs, I am not sure about cooked or fried though. I have read studies that egg yolk may inhibit the absorption of biotin by as much a 40 or more percent!

Even though this deals with raw eggs, I am not going to take the risk. If you really like eggs, just eat a tablet with something else, wait 30 minutes for it to digest, then eat eggs, this is what I do.

In any case, for something that over a long period of time delivers what I believe to be guaranteed results, as profoundly as it does, for something that is so cheap to buy and easy to consume (even easy to forget taking!) and finally something that has an overwhelming amount of positive feedback with pictures from other reviewers, the Natrol Biotin is arguably the best supplement for hair regrowth.

For me, it is and I am very more inspired to keep taking it. I feel as though I was in a bus ready to fall of a cliff (complete baldness analogy) until this product reversed the course.

1 bottle of this will last you for 3 months and change. Even if you are most skeptical, get at least one of these and give it at least a month before you make a decision to get another or not.

Like I said, it took me several weeks to even notice new hairs, but when I started noticing them, I really began to believe in this product. It is highly effective, try it!